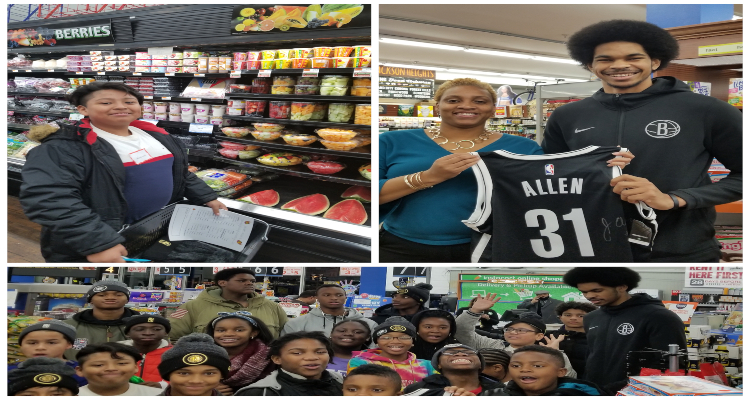 Jarrett Allen, 6’11” NBA center, is barely 19-years-old. However, the rookie drafted by the Nets in the first round of this year’s NBA Draft is already leaving his imprint on those younger than him in the New York City community.

Back in September, Allen gave out free haircuts in Brooklyn, and on Monday he partnered with Key Food and visited Jackson Heights in Queens to help 25 middle schoolers from Elmcor Youth and Adult Activities do some last minute Thanksgiving shopping. Rather than handing out turkeys, long a great holiday tradition, Allen gave each of them a $70 budget, a shopping list and a cart.

So think of it as almost “A Scavenger Hunt With Jarrett Allen,” but with a lot of food and a budget.

“I just want to show the people that I care,” Allen told NetsDaily shortly after beginning his shopping cart with greens and stuffing, and after playfully writing in “collard greens,” which (somehow) weren’t already on the list.

“The importance I show (by doing this) is that we’re more than basketball players. We actually care about what’s going on in the community and in the world.”

Allen’s mission was not only to help provide the students and their families with a Thanksgiving meal, but to teach the kids about math, budgeting, and organization, not to mention nutrition.

The sheet also included a budget box on the bottom of the sheet for the kids to do the math to distribute their $70 in really whatever way they want. Participants also received pencils and calculators for their journey through the supermarket.

Allen is only a few years older than the kids he was helping — which the kids found hard to believe no doubt because of his Afro atop his near seven-foot frame. He said the experience was helpful for him too. Allen grew up in Austin, Texas and attended the University of Texas for his only season of college ball last year, Allen has always been home for the holidays.

Brooklyn is as we know vastly different from other places around the world, let alone Texas. Allen is about 1,700 miles away from where he grew up. Now that he’s on his own, he admitted that while he’s helping the kids who participated, this is new for him too. Mom and dad took care of the turkey and all the fixings.

“Me being 19, I don’t have any experience in dinner, particularly Thanksgiving dinner,” he said with a smile, thinking of that first big meal-prep. “I’m trying to start with the basics. I don’t know if I could do a full turkey yet. I’m going to stick with small stuff.”

And with that, Allen added that these are items that he plans on using come Thursday (and for leftovers, of course).

“At first, I didn’t see it as that, but it’s a perfect way for me to shop for Thanksgiving,” he said with a laugh. “This is actually going to be my Thanksgiving food here!”

As Allen wandered around Food Universal Marketplace on the chilly Monday afternoon, the young Net had company the entire time. The kids followed along, asked him questions, and after a while, even helped Allen locate some items along the way.

At the end of the day, amidst the food-hunting, laughing, and banter flowing along that late afternoon, the lasting message he had for them was to be grateful for what they have.

“I want to show them to be grateful for what their parents have done over the years,” he told NetsDaily. “Just to teach kids how to manage your own stuff. They don’t understand how hard it is to budget a Thanksgiving meal and then finally bring it back home, so we finally get to show them how to do it. I would say, honestly, I’m learning it too. I never really fully understood how it is to bring home a Thanksgiving meal. They’re learning … and I’m also learning too.”

“There’s no scale to how important it is,” he added. “It’s one of the most important things for child development. They’re not kids, they’re older than kids. They’re becoming young adults so you have to teach them how to be able to add up their own things and how to know how to grocery shop.”

So that when they’re 19, they can make their own Thanksgiving dinner!

Your ticket for the: Jarrett Allen goes Thanksgiving shopping for 25 Queens kids … and himself